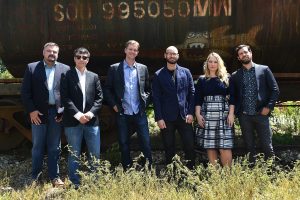 Kristy Cox is Australia’s Queen of Bluegrass. Adored for her youthful energy infused bluegrass, she has been awarded with radio success and accolades for her talent. Having signed with bluegrass label Mountain Fever Kristy released her album ‘Ricochet’ in January 2018, which debuted at #1 on the Billboard Charts for Bluegrass Album. The first single and title track of the album saw her sit at #1 on the Bluegrass Today Radio charts for two weeks. Kristy is set to release her new album ‘No Headlights’ on Feb 28 of this year. The new album features 10 incredible tracks, including the Golden Guitar winning single ‘Yesterday’s Heartache’ and a duet with the one and only Tommy Emmanuel. Kristy was nominated in the 2020 CMA’s in Australia for Bluegrass Recording of the Year, which saw her take home her forth CMA Award for her track ‘Yesterday’s Heartache’. The previous awards were for her singles ‘Ricochet’ 2019, ‘Another Weary Mile’ 2017 and ‘One Heartbreak Away’ in 2015. Credited for her performance and songwriting capabilities, Golden Guitar winner Kristy has been shortlisted in the International Bluegrass Music Awards the past four years for New Artist of the Year and Female Vocalist of the Year.From a young age, Kristy has captured attention with her distinct singing style and positive outlook, seeing her go on to open shows for major acts and appearing on Television and major Festivals across Australia, Europe and the USA, including an official showcase at the International Bluegrass Music Convention in the USA in 2015.