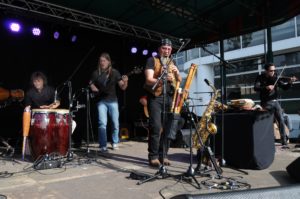 Mexican-born, Belgium based saxophone player, flutist, composer, researcher. Performer, folklorist and native of México Luiz Márquez, devoted his life to the study of pre-Colombian musical instruments, exploring the myriad creative traditions found among the indigenous ethnic groups of contemporary Mexican culture. During the course of his travel a period spanning decades in México. Márquez collected well over 200 native instruments, some of them copies from instruments dating back as far as 1000 years. All these copies were made specially for him , in the way of the ancient techniques . The ethnical music really touched his soul and he started studying it in 1971 under supervision of maestro Zacharias Segura. (+1993) Musical director from the Mexican National Folkloric Ballet. After several musical experiments while living in Europe, in 1986 Luiz Márquez decided to return to his roots: Mexico, its Indios, its landscapes, its tradition, its music,.... There he created a new sound, * Ethno Jazz * , combining the sophistication of the cities with his indigenous roots., combining the sophistication of the cities with his indigenous roots. His music is a pure relationship between North and South, in which the magic of tradition interfinger with Blues and the relation of nature with man is highlighted. In his music he uses several copies from authentic pre Columbian instruments such as Huéhuetl’s , Teponaztle’s, turtle shells, sea shells, different types of ocarinas and a large variety of flutes in bamboo ,clay and bone. This enigmatic multi-instrumentalist draws from the diverse culture and history of his Mexican homeland, as well as his early experiences playing; blues, jazz, rock, Latin.. Currently based in Ghent Belgium , he combines saxophone , pre-Columbian instruments, and percussion with other instruments such as guitar and bass guitar, to cast a spell of ritualistic intensity. Like shadows from Mexico's sultry and savage past, his music has a dark quality to it that sometimes scares off the unprepared, but adventurous listeners will find plenty to admire in his evocation of jungles, landscapes, and Aztec rites. Though his albums are often difficult to find, most of his work releases are really underground.